In His Service (Dark CR) 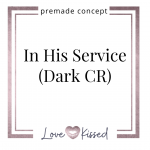 Her husband took everything from me. My mother, my father, siblings. Everything that I held dear in the world was ripped away by his hands. When I was old enough I promised myself that he’d know the same pain that he chose to show me. It’d makes sense that someone as heartless as Petro wouldn’t have much he held dear. The only thing that I know for a fact he cares about is the beautiful Nerida. She was a beauty queen back in her country, Greece.  Everywhere he goes I see her with him. Getting her will be harder than I’d like but I’ve spent all of my life training with some of the most ruthless killers in the world in order to make sure that I’d be ready for this.

As the days go on, I torment Petro. Killing his guards and leaving body parts where he’d find them. Snakes in the bed. Poisoning his food. I want him good and scared by the time I make my move. I want him to beg me for death when I do come for him and his beautiful wife. I won’t give it to him. No, he’ll suffer a long time before I take him out of this world.

Weeks of torment come to an abrupt peak when I see an opportunity that I just can’t pass up. Nerida is on her own, out of their compound. Even the hooded sweatshirt she’s wearing does nothing to hide who she is. I’d recognize her anywhere.

The minute I grab hold of her and toss her in the trunk of my car I know it’s a bad idea. Nerida was a trick, she was fitted with a camera and microphone. Petro sacrificed his woman to find out who I am and now that he knows it’ll be that much harder trying to get him out in the open.  It makes no matter to me, I’m patient and now I have the one person who might know more about Petro than anyone in the world. The Grecian beauty herself, Nerida.

I will break her down. Trick her into believing that she’s nothing. Until I build her back up again. She’ll crawl on her hands and knees just to please me and in the end I’ll still spill her blood.

I was supposed to have a charmed life. From the moment I won my first beauty pageant everyone looked at me like I had everything I could ever want. How wrong they were. I was ripped out of my home with no more than a ninth grade education, no money to my name and parents who swore that handing me off to a man nearly three times my age was the right thing to do. I’ve been in a gilded prison cell for the last five years of my life.  My chance at freedom came in the form of a rotten tooth. You’d think a man in his mid fifties would know that he should get a filling filled but after leaving it to fester it became infected and was causing him so much pain that he had to have it pulled. The doctor gave him some pain medication that knocked him out which provided my opening. All the years that I had been with him, I’d made sure to put away a few dollars here and there, amounts that I was sure he wouldn’t notice. Some days it was ten dollars other it was one, every cent counted. I managed to save up more than three hundred dollars. Living in America I knew it wouldn’t get me very far but It would get me out of this house.

Petro had sent all of his guards to check up on the latest sighting of the ghost. The crazed killer who had been tormenting Petro for a number of months. I didn’t realize that all the guards were still on the grounds until it was too late. They caught me trying to sneak out. To Petro, trust is everything. The minute he figured out that he couldn’t trust me I was of no value to him but I could be of use.

They fitted me with a microphone, a pair of sunglasses with a camera in them, and sent me out alone. They knew that the ghost was somewhere in the vicinity and would never pass up killing me. Petro didn’t care if I died he just wanted to know who his enemy was.

His enemy is a man named Slater. A man who makes me tremble in fear with just one look and probably the only person I’ve ever met who I’m more afraid of than Petro. He’s bloodthirsty and psychotic with his need to get his revenge on Petro. He’s sure that I have the answers that he’s been looking for, sure that Petro wants me more than he’s letting on and finally he’s sure that by destroying me he’ll be hurting my fiance. It doesn’t matter how many times I tell him that I was never anything more than a prisoner.  He treats me like an animal, but it’s still more attention than Petro ever gave me. I fight with everything I am to get away but the harder I fight, the more Slater seems to enjoy our relationship.

The more I enjoy it.

Petro is the only man I’ve ever slept with and all I know about sex, when Slater takes my body he exposes desires I never knew I had. He hates me and I hate him but every night he let’s me fight him until I’m moaning his name begging him to let me come.  Over the time I’ve been in his care all I’ve have to do is look at him and he’s ready to jump my bones. Slowly the hatred turns into a need so strong for each other that I’m willing to give him everything he needs.

Nerida has become more than just a captive. I want her in ways that I’ve never craved a woman. I not only want her to be mine but I want to possess her entirely.  I’m surprised when I find out that her hatred for Petro rivals my own. I thought she was part of the problem but it’s evident that she might just be the solution. Together we dive deeper into Petro’s crime life and we find out that he’s not as feared as he thinks he might be. Wouldn’t it be wonderful if instead of only killing the man that took everything from me, I destroy everything he built up during his life time.

Instead of staying the ghost in the dark, Nerida and I step out and one by one take everything from him. Nerida quickly becomes a different being all together. Now that Petro is no longer the person holding her she is blossoming right in front of me.  I want her, no, I need her in ways that seem unhealthy to everyone around me. I don’t care. She’s mine. She was mine before I even knew her name.

My goal is still the same, get rid of the man who took everything from me but now I’m distracted and he’s not as easy a target as I once thought. In order to completely get rid of him and his empire I have to do the one thing I never thought I’d do. Trust.

Nerida has a plan to go back inside to the Lion’s den and drawing my prey out, but how do I know that the captive will stay loyal to her captive. No matter how many times I get her to swear her allegiance to me or how many times I come deep enough inside of her I mark her womb, there’s always the chance that she’ll betray me.

If I want to rule it all I have to let my Grecian beauty fly free and hope she comes back to me with my crown between her bloody teeth.

Slater’s hold on me is suffocating. Consuming. Everything I didn’t know I needed.

I thrive as I serve him but only him. Everyone else around knows that my king will kill for his queen if they even look at me the wrong way.

Through the entire time I was with Petro, I found him to be a lacking leader. He’s the one in charge simply because there was no one around to challenge him. Now that Slater is coming in to his own it seems like the entire underground was made to serve him and his sadistic ways.

The issue is in order for Slater to take over he needs to get rid of Petro and I find myself in an intense situation. One where both of these men are vying for my attention. Both of them want me and I know whomever I pick I’ll sit at their right hand as a queen to their world.  Petro promises me everything I could ever want now that he knows how powerful I am. The riches, the status and my freedom.

Slater promises me pleasure beyond my wildest dreams, protection and way for me to explore this dark part of me I didn’t know I had.

I have Petro who has been nothing but a thorn in my side but now I know I can rule over him.  On the other hand, I have Slater who is my everything. He’s more than I can afford to give. He fills the dark, empty parts of me that I didn’t even know existed. If I choose him, I know I’ll be giving up everything I’ve ever known. But if I don’t choose him, I’ll be giving up the only thing that truly matters to me. Making this decision is the hardest thing I’ve ever had to do but I know deep down that I need to be with Slater. I need to be with the man who makes me feel alive.