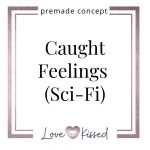 In the 20th century the human race went to the moon.

In the 21st century we made contact with an alien world.

In the 22nd century the aliens conquered the earth.

Now the only things the human race are allowed to do is manual labor or if you’re smart enough you can join the military. My mother said that I was a genius so joining the United Earth Military seemed to be the best fit.

I thought there were only three divisions to our military now but there’s a secret division that I’d never heard of. The ICR. Interspecies Compatibility Research division.

I’ve been chosen to join this division in what they are calling the highest honor. In reality all seems like to me is a breeding service.

Major Oren Vellon is one of the first to get through the intensive and rigorous testing that the alien species is required to complete before they are allowed to breed. On paper he’s the best fit for me but when the division shoves us into a secluded living capsule for a six month contract with eachother I realize just how much he and I will never be a match.

He’s arrogant, high handed and just all around frustrating. I’m supposed to be trying to figure out if our species are compatible with one another when all I actually want to do is rip his head off.

Just when I think I’m completely content to go through my six months in my own room I hear him cry out in his sleep. The haunted look in his eyes when he wakes and the way he begs for me to just sit with him shakes me out of my fury.

They left him out in space drifting, alone, for years. He can’t be alone anymore.

The vulnerability of this huge alien with purple and black skin is enough to soften my heart. Slowly we get to know eachother better and those same qualities that I once couldn’t stand began to flood my body with desire.

A desire he could smell and taste in the air with his forked tongue.

We were given six months to prove that our species could be compatible but will we ever be able to get over our differences or will the six months pass and the test result in failure?

I’m a scientist with the ICR, Interspecies Compatibility Research division. Some would even say that I’m the best in the program. Still I’m looked over for promotions or accolades merely because I’m a woman. I figured by the 22nd century the world would be over themselves but that doesn’t seem to be the case.

In an effort to prove to my worth I volunteer to take on a subject simply to find out the biology and hormonal affects on our body. Even though in regards to brute force the aliens have us beat but their ability to reproduce has significantly dwindled according to them. If I could figure out why there’s no way anyone would over look me.

I choose Second Lieutenant Asrrik Crel to be my subject. He was due to be released, this species version of court maritalled due to an altercation with a superior officer. Becoming my guinea pig was his only option to stay in the military as he wanted.

Unfortunately with him being forced to stay with me for the typical six month contract time made everything even more awkward. The testing was going no where. And all at once in the vast seclusion of the living capsule I realized that I’m never going to be as good as I want to be.

My despair triggers Asrrik. Instead of acting cold towards me as he’d been doing for the duration of the time he began to care for me. Entice me. Pleasure me.

I could care less about the research now all I want is for Asrrik to be mine. Giving in to our baser needs helped proved my research but do I give it to the government and move on with my life or stay with Asrrik and become his bride?

They are the enemy, and they must be destroyed.

I’m part of a secret group of individuals all inside the United Earth Military who have only one goal. Get inside the inner circles of the Alien civilization and find a way to kill them all. This planet was our for millions of years and then almost over night it was stripped from us and we were made second rate inhabitants.

I’ve been in the military for years and thanks to my quick wit and intellect I managed to get invited to join the ICR.

Basically they want to find out if humans and the aliens can make babies that won’t bring forth a new armageddon. So far the test have come back positive. One of the first to complete the tests, Major Vellon and his wife Allie have just welcomed a lavender colored little girl with ten finger and ten toes. Not the monster so many thought.

The tide of public opinion is changing. Suddenly people are starting to think it’s not too bad to intermix with the aliens.

When I was finally chosen to serve a six month contract with Captain Mevv Revix I jump at the chance. Captain Revix was one of the men leading the charge when it came to conquering my world. He would have all the information I needed.

I got right to work drowning him with my feminine charms. He was less than appreciative. As the days rolled on Captain Revix barely spoke to me, but when a surprise attack forces us to leave the so called safe space of our living capsule I have to depend on Mevv to protect me from everyone both human and alien.

With fear and uncertainty coursing through me I give in to the forbidden feelings I’ve been having for Mevv. He makes me feel a pleasure I’ve never experienced. He makes me want to be better. He tells me all about his culture and his people and I realize that they are stuck here on this planet just as much as we are. A love so intense I’m ill prepared binds us but when we are finally rescued and it comes out that I’m only put in the program as a spy what can I do to get Mevv to forgive me or is everything we shared truly gone forever?