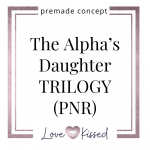 Just because the modern world still retains a smattering of magic (things like teleportation circles, potions shops, and the various magical races) it was still a rough set of centuries for a necromancer like me.  People were so touchy about reanimating corpses nowadays.  What I didn’t expect to be my most frustrating problem though was that it was even more difficult to actually make an even nominally romantic connection.

Anyone who shared my proclivities had gone even more underground or just changed. So when I saw the personal ad in Warlock Weekly that read. “Wanted, strong, dark magic wielder for domination,” I was shocked and ecstatic.  My cynical side said that this had to be too good to be true.

I decided to risk it and sent a message.  Several communications went back and forth as we discussed our likes and dislikes. Later, we exchanged pictures.  This had to be the most stunning vampire I had ever laid eyes on.  I couldn’t wait to get my hands on her, and I hoped that it would be a good match.  When we agreed to meet in person, we also agreed that this wasn’t really a date -just getting to know each other better.

That didn’t stop me from doing my best to impress.  She was even better in person.  Intelligent, quick-witted, and with a delightfully smart mouth that I couldn’t wait to tame later.  We got a little carried away with getting to know each other, and when she invited me back to her castle, things got very intense between us.

I had just pinned her against the wall when my brain engaged enough to ask what her safeword was.  For some reason that stopped her a moment, then she told me, and things continued.  Before the night was over I had her bent over the bed orgasming to my hand and one of my favorite whips.

When we had both calmed down.  She remarked that this was a fun experience getting physical with one she hoped to partner with for world domination.  At that moment I realized that there might have been an error in our communication.  But for me, it was too late.  I would make this vampiress mine.  Whether she thought she wanted it or not.

You just couldn’t get good help anymore.  After the last failure of a flunky, I had decided that it might be best to join forces with a peer to try to wrest some sense and control from this wretched boring world.  That proved to be difficult.  I finally had to take the desperate chance of putting an advertisement in one of the few publications that catered to dark magic users.

What I wanted was a strong powerful magician that could shore up my defenses and keep me safe while we set about livening up this tedious “modern” world. What I got was all of that in a package that was tall, intelligent, charming, commanding, and sexier than he had a right to be.  When we eventually met in person, I mentally upgraded our rendezvous from a getting to know you outing to an actual date.

Things were going very well indeed.  He made me feel things I hadn’t felt in centuries.   Butterflies in the stomach at my age were unthinkable.  It was when he pinned me against the wall of my own castle though that things really shifted.  I was floating at that, high on a rush that I’d never felt before from anyone.  I was only vaguely aware of him asking me a question before things got even more intense.

Pleasure, pain, pain and pleasure till I had screamed out my release more times than any other lover had made me.  When my head finally cleared, I realized that I would do just about anything to make this man my partner in all ways.  This world was about to get much more interesting.  I was puzzled over the look of utter confusion he had when I mentioned world domination though.

But I guess that’s what happens with you put out an ad.