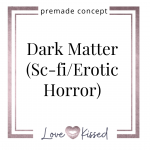 Heroes and Villains by Vivian Murdoch

Blind dates were bad enough; blind dates as a superheroine in my civilian identity were horrible.  Being mostly invulnerable and super strong meant that I couldn’t even feel a normal caress, and the fact that I secretly wanted to be played with roughly, well that was never going to happen.

Literally the only one in the entire city that could make me feel anything was my arch nemesis Shadowfang. His power, in addition to letting him turn into a gigantic werewolf, somehow negated my invulnerability. But not my super strength.

Which leads me to this blind date.  It was amazing. He was everything I didn’t know I wanted. Tall, dark, handsome, with an air of confidence that would have been arrogance in anyone else.  He swept me off my feet, and later, at the hotel, he literally swept me off my feet and carried me to bed, giving me a quick flirtatious swat on my ass as he did.

Two things happened then.  First, I felt the swat. Second, I really liked the swat. Every nerve in my body woke up and said yes more please.  I wasn’t thinking clearly with everything he was doing to me, but then it hit me.  I. Felt. The. Swat.

That meant that the man who was literally becoming the man of my dreams.  The man who was quickly driving me to the first orgasm I’d had in months that wasn’t self care had to be Shadowfang.  I had never felt the things he was making me feel.  I decided to give him back as good as he gave me and to not think about the fact that I was screwing the same villain that had been plaguing my existence as a hero.

I decided to see what dating a villain was like. Maybe he wasn’t as bad as I thought?

I didn’t date, but after plot number five was foiled by the irrepressible Amazing Lass (dear God, where did she get that nom de plume?It sounded like it was from the 1950’s) I found myself jacking off in my lair just to relieve the frustration. That’s when I realized that I was fantasizing about my nemesis.

I thought that was a warning that maybe I needed to try having a social life or at least a sex life if I had sunk that low. After a few false starts, I was finally on a date with someone that I felt some connection to.  From the moment I saw her I wanted to get my hands on her in a way that none of the women that I had encountered had stirred in me.

It was torture playing the game – flirting, romancing, winning her over when all I wanted to do was sweep the dishes off of the table and take her right in the middle of the restaurant.
When we finally kissed it was like a dam had burst for both of us, and before I knew it, we were checking into a hotel room, and I was carrying my goddess to the bed.

I didn’t know what I was getting into.  As soon as I had brought her to her first climax she turned the tables on me and gave me as good as I had given her.  The night became an amazing, exhausting back and forth between us.  It was only later, when I was holding her as she slept, that my world collapsed.  She was talking in her sleep about the battle that we had just had.

I had just fucked Amazing Lass.  I almost fled then and there, but something made me stay.  Maybe, I could work something out, maybe it would be okay.  I wasn’t going to slam the door on the best sex and possibly a fun relationship just because our professional lives clashed.

I would give this a try.

I had always wanted to teach a good girl how to be bad.

Book 2: Cat Got Your Tongue

I had seen her every night that week.  Someone new running the rooftops of the city.  It was obvious the first night that she was casing a ritzy penthouse apartment that just happened to be owned by one of the most notorious mobsters in town.

I wasn’t going to do anything with her just casing the place, but it made me curious.  I followed her.  It was clear she had a reason to choose a life of crime.  She obviously lived in a crime-ridden part of town, and just as obviously had people that depended on her. I couldn’t let her continue down this path, but I couldn’t do anything until she actually chose her path.

My chance came the next night. She finally broke into that murderous maniacs apartment. Before anyone could respond, before she could trip any more security measures that she didn’t realize she tripped, I grabbed her. She didn’t even see me coming.

And when she woke up, I had her in my clutches. She wasn’t going anywhere unless I let her, and I wasn’t going to let her go until I convinced her that she could much better serve me than being murdered trying to rob a mobster.

More importantly, I would make sure that she enjoyed that service. I recognized that, even at this early stage, I was obsessed. I was hyper focused. I wouldn’t call it love but it was the closest thing I could feel to that emotion.

I blamed my parents.  They couldn’t have taught me any normal skills no no.  I had the skills of a damn circus acrobat.  Then they went and got themselves killed.  I was lucky to end up at an orphanage that actually cared.  That’s why I was trying to help them the only way I could.

I had spotted my mark and cased everything.  I had a plan.  I didn’t expect the moment I had entered the penthouse for a tall dark someone to come out of nowhere and knock me out.  When I came to and I actually saw my kidnapper clearly, he really was tall, dark, and handsome.

Then he started telling me what type of mistake I had made by breaking into that particular penthouse.  He wasn’t going to turn me over to the police, which was a relief, but he also said that he couldn’t just let me get away with breaking the law and being so reckless.  While he pointed out that my actions could have brought down the wrath of the mob on me and the orphanage, he casually picked me up and carried me over to a strange looking bench, oblivious to the flailing of my still bound hands and feet.

When he placed me across the bench and I saw a flash of a knife I froze with fear.  When he quickly cut my pants and underwear off of me leaving my naked ass in the air, I was too shocked to do anything.  Then came the first crack of solid leather against my cheeks.

I didn’t want to believe him, but the feelings that I had, even as he rained pleasure and pain down on me, made me think that he was right.

I never asked for the powers that I had, but out of the blue, I just started having them – I could fly, and  I was stronger than just about anyone or anything.  I could even shoot lasers from my eyes. Discovered that one when I fried my favorite video game as a kid.

I reluctantly became a superhero, but it was overwhelming.  There was always some emergency, some crisis, some supervillain.  The villains were the only thing that made things interesting.  I felt bad for most of them.  They didn’t choose their problems either for the most part.  Just cogs caught in the machinery of life.

Then there was Xendra. She was different. She actually reveled in the destruction she caused.  She unshakably believed she was right in what she did.  Not only that, she was also attractive enough that I spent most of our fights more than half turned on.

Flirting with her was the only way to throw her off.  I felt more victorious getting her to blush than actually winning the fight most times.  She always escaped from me though.  Then one day, things were different; she actually caused some truly bad damage to a small charity hospital.

It was the first time I saw her confidence in herself shaken.  She fled and I knew I was not going to let her get away.  She would face what she had done even if I was the one who had to punish her.

She was more than what she made herself out to be, and I would get her to see that one way or another.

He was the one superhero who could constantly and consistently thwart my schemes.  It was so frustrating that I also couldn’t get him out of my head, and more times than I cared to count, I found myself dreaming of those muscular arms holding me down while he pounded into me in a much different fashion than our usual fights.

Then the bastard realized he could fluster me by flirting with me.   It made me desperate, and then I made a mistake.  I tried to never damage anything that wasn’t owned by someone who could afford it, but somehow, the small hospital became collateral damage. It sliced through me in a way that nothing had before, and though I tried to hide it, I got the feeling he saw right through me.

I had to get away.  This time was different; this time I couldn’t shake him.  He caught me, and before I could blink, flew us high into the mountains.  It was terrifying and exhilarating.  When we slammed into the mountainside, he started yelling at me.  I had never seen him angry before, and I didn’t expect that to turn me on even more than I already was.

It was too much, my shame and frustration at my mistake, the terror of seeing him actually not holding back when trying to capture me, and the shear heat of his anger.  When he finally drew in close, I couldn’t stop myself and kissed him.  It was like I had struck a match and dropped it down onto a stack of dynamite.

All of the tension between us exploded.  I didn’t know what was going to happen between us. The fire from his anger promised that I wasn’t off the hook.  But I knew that nothing would be the same, and that we had just rearranged the mountainside.