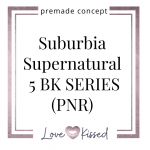 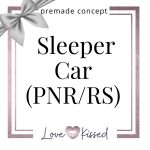 Alone on my 38th birthday, I blow out the little candle on my solitary cupcake. With my eyes tightly closed, I whisper six words. “I wish my life was different.” I feel a swirling wind, a piercing cold, and open my eyes to see two people standing in front of me. One shouldn’t be possible, as she is my grandmother–and we buried her six years ago. The other is a god of a man; tall, dark, and handsome. “Wow,” I breathe. “I haven’t even opened the wine yet.” Then I pass out.

When I come to, my grandmother is kneeling over me, and the man is scowling at the foot of the sofa. “Gram?” I whisper, confused and shaken. “It’s all right,” she softly tells me. “We’re here to help guide you, Jenna. You must learn to harness the magic within you and then find the Red Goddess and keep her safe.”

“Red Goddess?” I repeat. “Magic?” Then I ask the only other question that comes to mind. I point to the man and say, “Is he dead too?” When Gram laughs, the man’s scowl only deepens. “He is not,” she assures me. “Colby is as alive as you are, and he’s been tasked with the same mission.” I sit up and look between them again. “What mission?”

That’s when Gram tells me the story while Colby sits stoically. Apparently, magic runs on the female side of my family, and it first manifests during a time of upheaval in our lives. Gram learned of hers at fifty-two, when Gramps passed away. My mother learned of hers at age twenty-three, when my father deserted us. And now, at thirty-eight, recently divorced, and childless, I’m finding out.

And if that’s not enough, centuries back my family was tasked with guarding the Red Goddess, a rather large, rare red beryl. An ancesstress hid it and carefully documented where and what protection spells she’d woven around it. But alas, a practitioner of the dark arts found her journal and is even now trying to find the location of the Red Goddess. It’s up to me, Gram says, me and Colby to stop The Serpent, save the Red Goddess, and defeat evil.

Could this get any cheesier?

Finally, Colby speaks. “You would do well to believe, woman. Is not your grandmother back from the dead to tell you of this?”

He has a point. I ask if I’m really magic, and Gram walks me through sparking a flame. Then Colby invokes a spell and visions of the past–of the Red Goddess, of the bond being spoken by my ancestress, of her writing out her secrets–plays like a movie on my wall. The scene shifts to show me a man–handsome, blonde, with blue eyes as cold as ice–avidly studying an obviously old journal. “He seeks knowledge. He learns, he plans. We must do the same. If he can obtain the Red Goddess, he can unleash all the evil we’ve bound over the years and wipe out everything good. Simply because he can. He craves the power he believes this will bring him.”

“He is Travis. He is my brother,” was the reply.

“Oh,” I say weakly. “Gram, this is crazy. I want to believe you–how can I not–but this is a lot to take in.” Almost before the words are spoken, my door is blown open. The blonde man–Travis–steps through, a chilling smile on his lips.

“Ah, brother, you’ve found her for me. My thanks.” And then I have a front row seat to a short, bloody magical battle between two . . . wizards? Witches? Warlocks?

“Witches,” Gram tells me. “They are witches, just as we are. Fall back, Colby. He’s brought others.” Almost before I can register other bodies spilling into my open doorway, Colby spins to face us, waves his hands, and we’re transported somewhere else. To another living room, one that looks opulent and too rich for my blood.

“My secret home. Travis knows nothing about this place. We will be safe here while we teach Jenna as much as we can,” Colby says.

So that’s how it begins. Days pass as Colby trains me, snarls at me, pushes me to my breaking point. Gram can’t physically help–she’s not alive, after all–but she offers suggestions that Colby and I may or may not take. And one night, when I’m sore and mentally drained, I snap on Colby. Our anger burns hot. Then the anger turns to white-hot passion and we take each other in the training room. And then the shower. And then my sanity returns.

We can’t do this. Not with the battle for the Red Goddess looming ahead. My focus has to be on that. Besides, what would a man like Colby want with someone like me? Hadn’t my ex told me the reason he cheated was because of the twenty pounds I can’t seem to lose and the little lines starting to show around my eyes?

When we finally find where the Red Goddess is hidden, we learn Travis knows too. The ultimate battle lies ahead. And when it’s over, if we win, what does my future hold? Colby? Or a lifetime of emptiness?

The gods have a wicked sense of humor. Why else would they task me with helping the spirit of a woman teach her granddaughter how to use her magic in order to keep the Red Goddess safe? Although, one look at Jenna McBride told me she was a red goddess herself. Her long auburn curls, her bottle green eyes, her voluptuous figure put me in the mind of Venus reincarnated.

I push lustful thoughts out of my head and concentrate on her education. She’s a quick learner when it comes to magic and spells, a slow one with combat. I push her hard because we have no time to waste.

My brother, Travis, has coined a new name for himself: The Serpent. And he’s determined to capture the Red Goddess and unleash his version of power on the world. How he got to be so twisted, I don’t know, but I’m determined to stop him.

But then comes the night when Jenna breaks. We begin yelling at each other, and I can’t stop myself from grasping her shoulders and claiming her lips in a passionate kiss. She returns my kiss, and soon we’re having sex on the training room floor. Then in the shower. But when I ask for more, she shuts down. She must focus on the quest, she tells me, and it’s best if we leave things as they are.

Only I can’t. She’s a fever in my blood, and I want more each passing day. I feel something for her that I’ve never felt for anyone else. And when we discover the location of the Red Goddess, we discover Travis knows where it is too.

The battle draws near. I’ll give my life for the Red Goddess–and for Jenna. I’ll keep the woman I love safe no matter the cost–and my brother knows it. The danger is doubled now, because Travis has always wanted what is mine. I’ll be damned if he’ll have Jenna.

And when it’s over–if we win–can I convince Jenna I truly love and want her? Or is she too scarred from her past to ever love again?