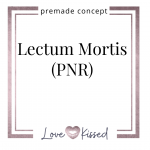 There is a debt that needs to be paid and I’m the one to collect.

As a supernatural debt collector, I’ve seen it all. Fairies with gambling problems, dragons with tempers whose destruction costs them a lot of money, and a lot of damage left in the wake.

I mean, who is going to collect a debt from a fire breathing monster that owes a bloodthirsty vampire more money than most humans see in a lifetime?

Me. They send me.

I’m a shifter, big and strong, but also, my job keeps me pretty safe. I know everyone’s secrets and my collection rate is one hundred percent. They hire me, they get their money.

But this time, the debt I’m collecting isn’t money.

An important shifter family has made a deal for the daughter of the alpha to marry their son. He’s got a terrible reputation but a deal’s a deal

Now I’m going to escort her to her betrothed for a lot of money.

At first, I didn’t understand why a wolf princess would need so much protection, though female shifters are growing rarer by the day. Still usually, the females can protect themselves just fine. Her family doesn’t think she can.

If I do my job, I get my money and the other family gets the alpha’s daughter.

But nothing is what it seems. We’re attacked again and again on the trip. Nothing I can’t handle but Astrid doesn’t do anything to help herself. It’s like she has no self-preservation.

But that’s not what’s going on and suddenly, money isn’t everything.

I live a life where I don’t have a lot of choices.

As the only daughter of the alpha, a bloodline seen as pure, many people want to mate me while I want to mate none of them. But as a female, it’s not exactly my choice who gets the pleasure.

My current no win situation includes having to marry a wolf that I can’t stand so that my father’s debts are paid and he can remain the alpha.

Being a family member of an overthrown alpha isn’t a good life. My brother’s and mother would be outcasts so even if I didn’t care what it meant for me, I did care about them.

So I agree knowing that if my secret were to ever get out, being an outcast would be least among my family’s problems.

To ensure that I get to my fiance untouched, his family has hired a man to escort me. Wyatt is to bring me to the other pack without a hair of mine out of place.

Except there are others that want revenge against my father and meet us along the way. Wyatt handles each and every one of them but the more that show up, the harder it becomes.

It doesn’t take long for him to wonder why I standy by and watch as he dispatches threat after threat. But I can’t tell him so instead I inside that as the alpha’s daughter, I’ve never been trained to fight.

Now that’s something he can’t believe and as we make the trip, slower now so that he can be more aware of any threats that might pop up, he insists on at least training me to defend myself in case something happens to him.

The training brings us a little too close and I slip up. I tell him the reason that I can’t fight alongside of him.

And now he knows the biggest reason that I don’t want to arrive at the new pack.

Because once they find out, I can only imagine what they’ll do with a shifter who can’t shift.

Astrid doesn’t seem to know what will happen to her if the new pack discovers she’s never been able to shift.

I do. I know. Worse than that, her father definitely knows. What kind of alpha would sacrifice his own daughter that way?

Unless… Unless he doesn’t know either.

When Astrid confirms that she’s been able to keep this secret from everyone, I’m not even sure how she did it. All sifters are required to defend the pack but maybe as the alpha’s daughter she was immune.

But now I’m in a real pickle.

My job is to deliver the payment. Astrid is the payment but if I take her to her new family, it won’t even take days for them to kill her.

She might be a pain in my ass but she doesn’t deserve to die.

So I come up with a plan. I send a message to her father and the new pack saying that we’ve had too many close calls–not a lie–and that we’re going to bunker down somewhere safe. I delivery her as soon as possible.

This at least buys us some time.

We head to a safe house that only I know with the plan to stay a few days. Those days turn into a week when I receive word that the new pack has been attacked. They’d like some time to regroup.

I intend to spend my days with Astrid, trying to figure out why a shifter born from two powerful bloodlines can’t seem to shift.

Except in trying to find the cause, I make the biggest mistake of my life by accidentally mating her.

And now we’re both going to die.

Having to stay in a safe house that no one else knows about is like a dream for me.

I’m not stupid. I know Wyatt wants to be rid of me but I also know that the pack I’m marrying into is expecting some bad ass wolf to emerge whenever they need her.

My mother is from one of the oldest shifter bloodlines and my father’s side has produced the greatest alphas to ever live. He’s one of them and my third oldest brother is the next. Everyone wants to be part of our family.

It’s how my father got into debt in the first place. He’s a little too cocky about his alpha power and I’m the payback of his transgression. One my mother might not even know about.

All I want to do is spend, what’s likely, my last days alive in peace.

Wyatt won’t have any of that. He’s insistent that I have a wolf inside me and that he can get her to come out.

It’s not until after we’ve mated that something changes.

He says it was an accident. That he never intended to mate. But there’s not a lot he can do about it now and I knew it was happening even if he didn’t. The other females had told me what to look for and he’d come through with fireworks and stars.

Now one of my problems has been solved but a new one pops up.

The new family isn’t going to want me now that I’ve got his scent on me and now that I’m no longer a virgin.

Mating Astrid is the dumbest thing I’ve ever done. But I’ve also never felt this way before and know that it was the right thing to do.

Not only does it get her out of marrying that bastard her father was willingly giving her but it got her wolf to come out into the light.

But she doesn’t know how to be a wolf so it’s time for a crash course because one thing we both can be sure of… each of those families are going to be gunning for us.

I now owe a debt that I can’t exactly repay. I can’t give them Astrid and there’s no dollar amount that I think they’ll take. Because if it’s about money, money I have and they can take it all as long as she’s with me.

First, we go back to her pack to explain the situation. Her father’s anger knows no limit and I almost have to kill an alpha. I could do it too. They don’t know my history which means they don’t know that her mother’s family and mine used to rule together. Which means her mother is a strong wolf but I’m an alpha from an even stronger pack. I just didn’t want to run the pack so I left.

Lone wolf, some called me but I had a pack. I just didn’t stay there.

Now her family is in shambles. Her mother knows what her father’s done and he has a huge debt to pay. Since this is Astrid’s family, I’ll be on their side as long as they don’t touch her. I’ll fight with them. I’ll kill with them.

As long as she’s still by my side when the smoke clears.

There’s no other way to put it.

I’m mated to a wolf that I barely know. My own wolf comes out but it’s like I’m a fawn trying out my legs for the first time. I’m not strong. Not like I should be.

And everyone is going to want blood.

My blood and his blood.

Once the fight clears between my father and my mate, everything gets laid out on the table. Including why I never should’ve been given to the man I was supposed to marry. The things Wyatt tells us makes my stomach tighten. If it wasn’t for Wyatt, I would’ve been that man’s new plaything.

There’s still the matter of the debt. But Wyatt and my brother’s thing that it’ll be easier to rip out the throats of the family I was supposed to marry into than to pay them off.

We don’t have to wait long before my former fiance and his family shows up. Except that I’m caught alone and he doesn’t’ seem to care that I’m not a virgin anymore. Actually, he says he almost prefers it.

While his brothers and father keep mine busy, my former fiance drags me off into the night.

Now I’m stuck in their pack, waiting for their mating ritual which is nothing like ours. Ours is private. Theirs is public and I’m about to throw up.

Unless I can my wolf to cooperate and keep them all away until Wyatt can get here.

I can’t save myself against all of these male wolves, but I can hold my own until the calvary arrives.